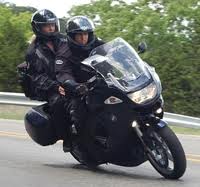 I had to pass a test before I got married. Not the blood test we all need to satisfy. And not the challenge every woman faces to produce a palatable meal. It was a simple test, yet profoundly difficult. I had to show my future husband I could lean into the curve.

I’d traveled cross-country many times but never on a motorcycle. Newly divorced and eager to explore the opportunities a new lease on life offers, I found something charmingly challenging in his invitation to ride with him from Washington to Seattle on the back of his BMW. Five thousand miles. Camping in a tent. Eating at Taco John’s. An adventure impossible in my prior life. It took me less than a split second to say yes.

But first, I had to learn a few things. Like how to stay awake riding on the back seat. The mesmerizing ambiance of warm breezes, the overpowering scent of clover, the visceral hum of power between our legs–any one was more than enough to send me nodding off. Seat belts aren’t used on a motorcycle, but I suspect he considered any socially acceptable way of tethering me to the back. We settled on taking breaks more often than he usually did, which turned out to be a good idea as he fell asleep himself when we stretched out under a tree on the footprint of our tent.

And I needed to learn to look to the side. I hate to admit that it took more than a day for me to realize if I didn’t change my ways I’d be staring at his helmet all the way to the West Coast. Leaning to peer over his shoulder wasn’t a position I could maintain for hours. But if I gave up my need to ensure he was staying on the road and simply turned my head sideways, a whole new vista opened up, one that might see the subtle intricacies of a barn self-destructing from years of neglect, the pattern of birds in flight across the horizon, the growing and diminishing immensity of water towers as we passed beneath them.  And corn. You can’t appreciate how much corn is grown in our country until you’ve spent two days plowing your way through the largest corn maze in the world called Nebraska and Iowa in August.

But the biggest challenge was suspending my belief that sitting straight in my seat was the most secure position for my body. It works in cars, trains, and airplanes–why not a motorcycle? My future husband was an astrophysicist and should have been the perfect teacher of the principle that it’s gyroscopically advantageous to lean into a curve rather than away from it. He tried. After our first unsuccessful attempt to hit the road in tandem, he pulled over to an ice cream stand. As we sat in a booth sipping cherry malts, he drew diagrams with arrows and curves on the napkin and used words like “torque” and “momentum” as if they were supposed to mean something to me. Finally, realizing it wasn’t “taking,” he looked at me and said, “Look, it just works, okay?” That was probably my first step towards having faith in another man.

Even so, the first leg of our trip on the open road left both of us in doubt. His demeanor went from exasperation to concern as my body refused to obey any command of my mind, and every curve we approached instinctively sent me bolting in the opposite direction.

“Lean into the curve,” was his request, then admonition, then direct order, as he evolved from gentle academic to commanding general. But it went against every gut instinct I possessed. To hell with the laws of physics–not when it was MY head that was going to bounce on the pavement.

Finally he said, “At least don’t lean away from me. Just do your best to keep your body in line with mine, okay?”

Now that carried a hint of logic. If he wasn’t falling off the motorcycle with the gyrations he was making with his body, the probability was minimal mine would. Besides, it was easiest to do with both my arms wrapped firmly around his waist and the front of my body fastened like glue to his back. Suddenly the concept carried some inherent positive reinforcement.

“Carol, ease up. I have to breathe,” he said after a couple of hours of near asphyxiation. My arms were getting a bit fatigued by my stranglehold, and as I eased up it was also easier to let go of my now clearly irrational fears. This was an adventure after all. And as hard as it was to believe, it appeared possible there could be a man who both knew what he was doing and was true to his word. And, miraculously, I was on a motorcycle with him.

But despite my new-found faith, I had my own ultimate test. As good as it felt to be with a man I could trust, there are some things in life you have to face alone. After a couple days of less entangled leaning, I was ready. Ahead was a huge curve in the road sloping sharply downward the side of a steep canyon.  As we topped the crest, I let go. I gripped my seat, held my breath, forced myself to keep my eyes open, and allowed the laws of physics to do their thing.