All of us have that list or pile of books that we should read for any number of good causes, but somehow they remain at the bottom of the pile as we engage more easily in the books we want to read. In this case, my purpose was to learn more about the history of Germany between the two World Wars to flesh out my understanding of characters I’m creating for Mismatch, a novel set in 1945 and dealing with US involvement with providing aid to the Nazis during World War II. When I discovered Defying Hitler by Sebastian Haffner, a memoir of a young German who was a youth playing with toy soldiers during World War I and who came of age during the years that Hitler and the Nazis came to power, I felt I’d found what I needed to learn more of the social impact of this change of order in Germany. Still, it took a while to commit to reading it. When I did, I found this and much, much more.

For those of us studying this period in hindsight, it is very easy to get bogged down in questions about how the German people could have bought into Hitler’s agenda or not known what was going on regarding the extermination of the Jews. After reading this account of the subtle and insidious ways that Hitler used to permeate the German people with his credo of hate towards the Jews and his propaganda that built on what they wanted to hear, for the first time I could understand how a rational people could ultimately be lead to irrational actions. It also enlightened me to how many people in Germany at that time did not buy into Hitler’s agenda and were acutely aware of how their way of life was being changed forever, and how painful it was when some (like the author and his family) came to that terrible realization that they could no longer live in their native country. Knowing how everything ended for the German people, it was hard not to shout out a warning to the author not to delay, not to keep hoping that it would never get worse than this. Perhaps what this book drove home best was the humanity and vulnerability of the people involved and how many more basic human life decisions were made compared to the calculated political decisions being made at higher levels.

The book stops abruptly before World War II begins, and the manuscript wasn’t discovered until decades later. So much has been written and interpreted about the war during the time the manuscript was not available that it is most refreshing to find a journalistic account of that time period untouched by those interpretations. Ultimately it is an intensely human story, made even moreso as it captures on such a personal level one of the most inhuman time periods in history. I highly recommend it. 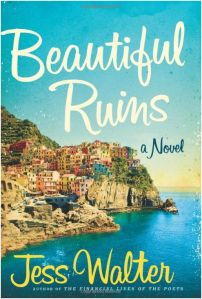 Any ruin contains a silent history that speaks to the viewer from many different levels. The artist sees the compilation of lines, colors and textures that the aging process produces. The historian has that special sense that can hear the voices of the people who lived and maybe died there. The traveler may see it as a destination or merely a point of interest along the way to where he really wants to go. As always, we interpret life through our own lens and usually see what we’re searching for at that point in time.

Jess Walter has taken this process to a new level by weaving stories, locations, and people both real and fictional to produce a novel where the Beautiful Ruins could be any of the above. It is a fascinating story of how the serendipity and the randomness of life events can coalesce into a unified whole, if you but know what to look for. I marvel at the planning alone it must have required to take events from the early 60′s and relate them so exquisitely into a setting in the current time to create a unified whole. His characters are each unique and so very, very human; even Richard Burton. I’ve always believed that most of us are mainly bumbling along through life most of the time. Walter proves this point in his book in such a way that, unless you’re looking carefully and closely, you don’t see the intricate infrastructure he’s built in such a seemingly effortless manner to present this sense that life in its consummate unpredictability eventually prevails. Some elements of the story are patently absurd, and yet they fit in perfectly with the story and the point the author is trying to make.

I listened to the Audible version narrated so expertly by Edoardo Ballerini. It was a delicious experience hearing his beautiful Italian interspersed with the American English of most of the characters. He portrayed flawlessly men, women, the arrogance and self-centeredness of Hollywood and the naive but practical inhabitants of a miniscule Italian village cut off from the rest of the world. I highly recommend it for a remarkable adventure through Italy, Hollywood, and along multiple paths through people’s lives who each, in their own special way, may constitute a beautiful ruin.

The cover says it all: If you’re lost, get a guide and put one foot in front of the other until you’re found. In a sometimes gut-wrenching expose of the challenges of her short life of 24 years, Strayed opens her heart and her life to show how she found her own resurrection. Admittedly unprepared for the adventure, she discovers too quickly how much, measured with every toenail she loses along the way. Very little of what she describes would motivate me to want to pick up a similar challenge, but I found myself envying her courage to face in such a forthright manner her many early mistakes. It made all of her triumphs, not least of which was finishing the trail, that much more meaningful.

There were so many opportunities when Strayed could have embellished her accomplishment that she didn’t take, that I believe it is all true, and I value highly honesty in a memoir. Fortunately the book moves along rapidly; you never feel the tedium that must have accompanied her on many miles of the 1,000 mile trail. That said, the character growth she acquired and portrayed in her writing during that six month period of her life is astounding. I highly recommend this book as a unique variation of “A Walk in the Woods.” It is very difficult to put down, once you’ve started your own journey along with the author.

Black and Blue, by Anna Quindlen 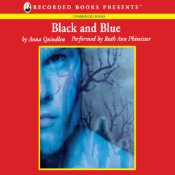 Spousal abuse is a challenging, difficult topic to both write and read about. I put off reading this book for some time, despite having read several other gems in Quindlen’s repertoire and knowing the quality of her work. And though it was still a hard book to take in, the skill with which she developed every character in this book made it well worth the effort. Spousal abuse doesn’t happen in a vacuum between a husband and wife; children and families are equally victimized and scarred for life, and Quindlen uses every bit of her remarkable writing expertise to make this point. As well, Quindlen used those skills most effectively to show the birth and evolution of an inherently flawed relationship.

Phimister’s verbal portrayal of every character was equally well-done. She captured well the painful suffering and confusion of the main character as well as her moments of joy, but easily slipped into the voice of a Bronx cop, an aged holocaust survivor, an eleven-year old boy and a Southern belle. Her reading was thoughtful and sometimes pensive, totally fitting a story wherein the main character is struggling to understand what happened to her life.

There are some stories in life where there can be no happy ending. This is certainly one of them, but it still ends on a note of realistic hope for the future, and I thank the author for that. I highly recommend this book.

The Marriage Plot, by Jeffrey Eugenides

Three characters dominate this story, and they are exquisitely developed through the course of a couple of years by the brilliant writing of Eugenides. Each is flawed or challenged, some more so than others, and each spends the novel’s time overcoming those challenges or learning to live with those flaws. That said, I kept waiting and hoping at some point any of these characters might become truly likable. It never happened.
There are many literary references throughout this book that would probably add another dimension if you researched them all further. But the basic story line of “the marriage plot” is one that has been told many times over. This was a new opportunity to breathe some life into it, writing about it from a more contemporary perspective. However, Madeleine never really springs to life. The men still seem to be living far more interested lives, and she’s reacting to them more than creating her own. Perhaps the point of the story might have come off better written by a woman?
The narration was excellent, and the narrator created with skill a believable woman in Madeleine and the critical differences between Leonard and Mitchell.
I chose this book because I’ve read Middlesex and was impressed with what Eugenides could do with such a unique and challenging topic as hermaphroditism. In this book, he’s tackled a more universal problem, taken fewer words to accomplish his goal, and made a good attempt to turn out an excellent novel. I simply wish that by the end I had cared more about what happened to the characters.

The Chaperone, by Laura Moriarty

Well-done, well-researched, and performed with the excellence only Elizabeth McGovern can achieve. Moriarty takes a brief slice of Louise Brooke’s life, a few weeks spent in New York at the beginning of her career, and weaves a rich, full life history of a woman who served as her chaperone whom history has absorbed into anonymity. Moriarty achieves the equivalent of high drama with the details of an ordinary life, doing it with incredible attention to detail that reflects the spirit, politics and morals of the time, ranging from the 1920’s through the 1970’s. It’s a broad scope, and while the last part of the book races through decades toward the inevitable end of a life well-lived, her meticulous treatment of the critical moments in a life that can change the course of a life is drawn with great care and sensitivity. I highly recommend it, especially in its Audible format narrated by Elizabeth McGovern, who can perform a petulant teenager and a German immigrant with equal expertise and credibility.

A slow-starting, but ultimately very moving story of a Jewish couple who move from Germany to England in advance of WWII and who do their utmost to become “English.” One of them succeeds while the other can’t let go to the old family traditions. For each of them, their ultimate challenge comes in the form of a golf course Mr. Rosenblum is intent on building to satisfy the final requisite of being truly English.